Pirate101 is a pirate-themed MMORPG set in the same fictional universe as Wizard101. Fight enemies in a turn-based combat system, complete quests, sail Pirate ships, and play with friends.

Pirate101 is a swashbuckling themed MMORPG developed by KingsIsle Entertainment. Taking place in the same world as its sister game Wizard101, players become corsair explorers, searching for treasure and steering their vessel through the skies of Spiral. Choose from one of five classes and employ a range of abilities to make your enemies wish they had scurvy. A turn-based combat system sees players tactically control their character and companions on the battlefield. Over 50 companions with unique abilities can be recruited to your crew. Extensive voice-acting and an engaging story pits players against the might of the Armada and sets up a quest to search for the legendary city of El Dorado. Online safety settings allow parents to ensure their kids are safe while playing with other people in the kid-friendly world of Pirate101.

When I first launched Pirate101, I was expecting a reskin of Wizard101. I thought, “Well, here’s KingsIsle Entertainment cashing in.” I like being wrong. Pirate101 is a world unto itself, with a turn-based combat system, flying pirate ships, and fully voice-acted NPCs who teeter on the edge of ridiculousness. With self-aware humor playing on pirate tropes throughout the game, I was thoroughly entertained. Again, a game made for kids stands out against its more mature counterparts. A Pirate's Life For Me

Gotta love a game that has to appeal to kids during its character creation. Names are pre-designated so that I became Loveable James Kirk. No customization prevents non-children—and kids—from entering the game with names such as “CoolGuy69.” You build your character by selecting from a pinwheel of choices, answering why you're an orphan and why you're locked up on a ship like an Elder Scrolls Game. The puppeteer backstory is a pleasure to watch in action, as Mr. Gandry narrates your life story while Boochbeard questions your history. There’s a touch of humor in every choice, not overwhelming but enough that nothing feels boring. And the reactions to your choice add depth while being entertaining.

I chose to become a swift and cunning Swashbuckler. Unable to resist challenging the Armada officer to a duel, I was locked in the brig and left to rot. Then it’s time for physical customization. Picking from a small rack of choices that designate your face and clothes, I walked away with a devious and Napoleonic James Kirk—the kind that just condemned a Red Shirt to a horrible death. And then you select your Pirate Flag, from a wide selection of pre-designated icons that you can customize. Boochbeard and Mr. Gandry should never have let me out of my cell. I was about to plunder all of Spiral and leave none of the booty behind. Compared to its sister game, Wizard101, Pirate101 looks better and runs smoother. The game was made in 2012, so it's far from the pinnacle of breakthrough rendering. Nevertheless, it offers a smooth polish with enough detail to please the eyes. I did notice some blurring of textures, but it wasn’t game breaking and reserved to complex objects such as bushes or tree leaves. Every interaction with an NPC includes voice-acting, where you can tell the actors cared—or were at least paid well enough to deliver a believable performance. Although, at one point the voice actors switched for an NPC. An anthropomorphic frog named Ensign Levy went from Oliver Twist to Samuel Jackson in two dialogue sheets. It’s quite an impressive mistake, and I can’t help but imagine that someone at KingsIsle Entertainment thought it hilarious enough to leave in the game.

Navigating the world of Pirate101 does not require a compass. You move around with WASD, and can spin the camera with the left and right mouse button. The default mouse spin by left-clicking is nauseating, like spinning in a rolling chair with a leafblower. It was a bit too much, so I settled for strictly using WASD to look around. You can then run up to NPC's or interact with objects by pressing “X” or left-clicking. The tutorials walks you through every step. Kids will not have any problem navigating the controls, since the game’s charming atmosphere invites you to explore every element of the user interface. Fighting is turn-based, taking place on a tiled field of battle. When you enter a fight the camera will change to an overhead view of the battlefield with you and your enemies beginning on each side of the grid. It's a tactical layout similar to what’s found in Wakfu and Dofus. Navigate your team around the field to gain the upper-hand in battle. You have abilities on a hotbar that can be activated to dish out overwhelming damage, typically cutting to a cinematic scene. Additionally, other players can join your fight should they stumble into it or intend to help you out. At the end of combat, every player receives their fair share of loot and credit for winning, should it be required for a quest. There’s no room for mutiny in Pirate101 combat. Combat animations are unexpectedly well-done, if not slightly over-dramatic. I hit a crit with my basic swashbuckler attack, translating into a slowed-down slice, followed by a back-flip-heel kick to make Neo proud. The Armada Angel's counter was no less theatrical. So, while Pirate101’s system is turn-based, KingsIsle Entertainment delivers animations reminiscent of action movies. Wizard101 had the same elegant style through its monster summon cards. Combat sound effects are excellent as well—frog warriors make ridiculous noises like Murlocs as they swing tribal spears while your sword evokes the sense of connection through the swooshing noise of its swing. It’s a comical presentation that turns a system that could be monotonous into a vivid show.

Once you leave combat, you better move out of the way (do what DMX tells you) because you can easily reenter combat if you choose to dilly-dally. It’s difficult to discern how close you have to be to an enemy to engage. Some enemies simply spawn and run up to you, thrusting you into the fray of battle as you were only trying to equip your new cutlass. It's an issue, considering the number of players engaging in fights around you no matter what area you’re in; the landscape is littered with fights. So make sure you hug the wall after leaving a fight to avoid a shark attack. As you travel, you meet companions who will aid you in combat. Through the tutorial I unlocked Subodai, a Mongolian horse with a thick accent, eager to help me conquer the high seas. Subodai’s dialogue had me sensibly chuckling because of his accent and observations as we traveled. Companions level just as you do. Opening the companion menu by pressing “U,” you can spend points in their abilities. You cannot level companions past your own level. Subodai was stuck at level 3 until I leveled up to 4. Employing companions in combat makes gameplay more engaging as you eliminate enemies efficiently by employing your team. The game proceeds through a series of quests, adding to the story and building the fantasy world of Spiral—if you’re into that kind of thing. While the objectives are cliché, NPC dialogue and your companion’s antics give the world a rhythm that doesn’t become monotonous or repetitive. Seemingly trivial tasks like exploring behind a waterfall are inviting thanks to your anthropomorphic sidekicks. What's more, you’re never alone on your adventure. Other players are always fading through you, joining you in combat, and requesting your friendship. While what you can type is limited to proper grammar and politically correct speech, the number of players—underaged or otherwise—breathe life into the silly world of Pirate101. 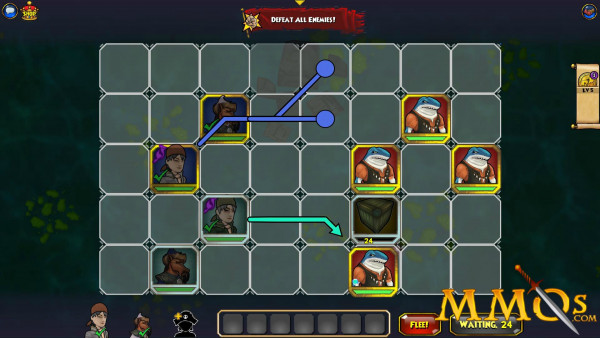 The cutlass didn't fall far from the Wizard Tower as Pirate101 employs a similar money-grab system to Wizard101. The game’s content is divided into Chapters and many of those chapters are locked behind a paywall that must be purchased with the in-game currency Crowns. Chapters only have to be purchased once to unlock forever. Meaning at some point a child will reach a locked wall and will beg their parents for a credit card. The free content is a lure, or demo, to draw players into the game and see them invested before asking for payment. You can pay a subscription fee and unlock all of the game’s content so long as you renew your payment.

Barring game content itself, there is a cash shop with a treasure chest of items to purchase. Mounts, pets, and cosmetic costumes are all up for grabs. Moreover, overpowered weapons and gear can also be bought. Does that mean the game is pay-to-win? Yes. Nevertheless, the overall emphasis of the game is not competitive but blue-ribbon and kid friendly. Kids with unlimited access to Mommy’s bank account will undoubtedly stomp their opponents but world building and story are the central focus of Pirate101’s imaginative world. Pirate101 is a fantastic MMORPG suitable for all ages—especially kids. Its tactical, turn-based combat system stands outside the realm of typical MMORPG’s and differentiates itself from Wizard101. A clean presentation and well executed voice-acted NPCs creates an immersive world that is fun to explore. Fun is undoubtedly the key term for Pirate101. It's a fun, accessible, and swashbuckling MMORPG.