War of the Immortals

War of the Immortals, WoI for short, is a 3D fantasy MMORPG set in the world of Motenia with a top-down view inspired by Blizzard's Diablo franchise.

War of the Immortals Overview

Journey to Motenia, a world of myths, legends, and ever-warring gods. Players are taken into a world ravaged by the age-old struggle between the mighty Odin and the evil Loki, from the legendary city of Atlantis, to the mythical realm of Asgard, where they take up arms to defend the last bastions of humanity from Loki’s brutal and powerful armies. Heed the call of battle as one of nine playable classes and help Prince Roan defend and protect the realms of gods and men from the forces that seek to destroy it. The game shut down on January 9, 2018.

War of the Immortals Key Features:

War of the Immortals Featured Video

War of the Immortals Classes

Berzerker – a melee class specializing in unleashing brutal damage and destruction on their enemies. However, their medium armors are very susceptible to magic attacks. They can immobilize enemies with snares and quickly close the distance, making them an ideal off-tank in raids.

Champion – equipped with heavy armor, Champions have the ability to strengthen their defenses to withstand huge amounts of damage from enemies. They can also keep enemies preoccupied with taunts while party members move in for the kill.

Duelist – masters of the sword and adept at using dark magic. They can inflict huge damage while weakening the enemy using a variety of debuffs. They use demonic forces to gain additional advantages on the battlefield.

Enchantress – they specialize in using the harp to play music and songs that invigorate and uplift their allies’ spirits while demoralizing the enemy. Their offensive and defensive buffs, as well as their enemy debuffs, make them an invaluable member of the party. *This class is gender-locked to females only.

Heretic – they call upon divine powers to heal their allies and use dark magic to inflict damage on their enemies. As the only healing class, they are an essential member of any party.

Magus – masters of magic and the elements, Magi can rain death down on multiple enemies from afar. They can deal the highest amount of damage of all the classes. Their AoE and snaring skills also make them perfect for crowd control.

Ranger – equipped with might bows, Rangers specialize in unleashing precise and deadly attacks from a long range. They assist allies on the battlefield by immobilizing enemies with their AoE traps and skills.

Slayer – quick and deadly assassins that can inflict massive damage in a short period of time. They use precise and lethal attacks on their opponents’ vital points to swiftly end the fight.

Harbinger – a unique class that combines melee damage with magic. They can deal massive critical damage using their psychic powers and can also absorb damage at the cost of mana points. They can perform the role of DPS or as an additional off-tank due to their mana shields.

War of the Immortals Review

War of the Immortals is a free-to-play fantasy 3D MMORPG inspired by myths and legends from Norse Mythology. The game was developed and published by Perfect World Entertainment, known for other free-to-play MMORPGs like Perfect World, Rusty Hearts, and Forsaken World. The game went into open beta on December 1, 2011 and was released on August 30, 2012. WoI can also be downloaded and played on Arc and Steam. Like most MMORPGs, before players embark on their heroic quest to save the world, they first need to create characters. Players can choose from nine different classes, each with their own strengths, weaknesses, and playstyles. Apart from a short description, the class selection screen doesn’t really give much information on the classes. I, however, have taken the liberty of giving a brief explanation of the classes in the Classes tab to help you along. In a nutshell, the Berzerker, Champion, Duelist, and Harbinger are the melee classes with the Champion taking on the role of tank. The Magus, Ranger, and Slayer are the typical ranged DPS with the Magus more suited for crowd control. The Enchantress and Heretic are the support classes, with the Heretic taking on the role of healer while the Enchantress supports the party with buffs and enemy debuffs.

Character customization is a bit limited in War of the Immortals. Aside from picking the gender (Enchantress is female-only, by the way), players are provided with only a few face types and hair color options. Personally, I like to spend time customizing my characters and the lack of customization is a definite let-down. After creating a character, players must first march through a prologue that serves to introduce them to the basics of questing and killing monsters while setting up the background story for the events to come. Upon completing the prologue, players are then thrust into the city of Atlantis, where the real adventure begins.

Everything about War of the Immortals is decidedly similar to its predecessor, Battle of the Immortals, and gives off a Diablo-y vibe. Graphics seem to have been recycled from BoI and look a bit dated for a game released in 2012. Granted, they use the same engine, but as a sequel, WoI could have at least sported an updated UI layout or maybe overhauled menus. The gear, however, is intricately done. The player models are also detailed, as well as the animations and effects. Like most MMORPGs, War of the Immortals is quest-driven. The quests are your typical “kill this, bring me that” types. And also like most RPGs, the quests are linear and serve to guide players from one area to the next while providing them with gold, experience points, and, occasionally, new equipment. Leveling up is pretty easy – by the time players complete the prologue, they will probably be around Level 10, which is really fast considering that the prologue only takes about 10 minutes. The game’s auto-path and auto-kill feature only makes things a whole lot easier. The game also features a very basic and old-fashioned skill and character progression system. Players are given stat points every time they level up once they reach Level 20. Players then distribute the stat points among their VIT, SPR, STR, INT, and DEX stats. Players automatically unlock new skills at certain levels. These skills can then be improved by visiting a skill trainer NPC. Improving a skill costs both gold and experience points, which are both pretty easy to come by. However, without a skill tree, specialization is severely limited.

War of the Immortals’ story however, is quite unique, and features a mix of different myths and legends including Norse and Greek Mythology. The game developers try to sell this point through lengthy NPC dialogs and even an in-game journal. It’s a great break from the monotonous grinding, but it does get a bit tedious later in the game, even for someone who loves reading the backstories. 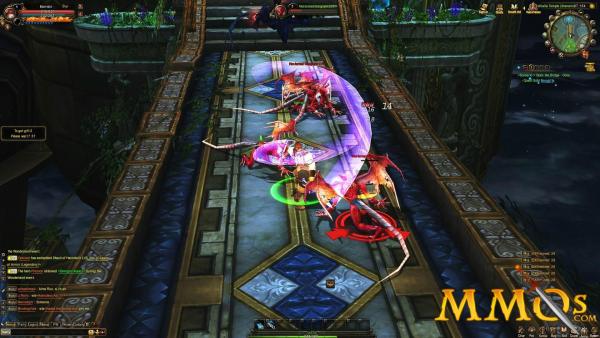 War of the Immortals brings a unique twist to the MMO pet system. Monsters randomly drop catchable versions of themselves, which allows players to tame virtually any monster in-game. Not sure if it works for bosses, though. As with most MMORPGs, pets can be summoned to help the player in battle. What’s unique about the pet system in War of the Immortals is that players can purchase a variety of skills and abilities for their pets. Players can customize their pets to fit specific roles that support or complement their playstyle, which makes each player’s pet stand out from the crowd. War of the Immortals features a variety of PvP modes to satisfy even the most hardcore PvP player’s thirst for blood, including a three-way 540-player PvP arena. At Level 50, players are given the opportunity to join guilds and form alliances. Guilds can take over 30 territories scattered across Motenia. These territories offer bonuses to the guilds holding them and is the main source of PvP in the game. Players can also kill other players in PvP zones. However, they can only kill and be killed by other players flagged for PvP. While War of the Immortals does offer a few cool features, like a good story, a unique pet system, massive PvP, and elaborate and stunning equipment, these aren’t nearly enough to cover up its obvious flaws. Outdated graphics, monotonous and unchallenging combat, as well as the lack of character and skill customization will undoubtedly make players think twice about investing their time in this game when there are tons of better free-to-play MMORPGs out there.

War of the Immortals Videos

Playlist: War of the Immortals
Links

War of the Immortals Links

War of the Immortals System Requirements

War of the Immortals Music & Soundtrack

War of the Immortals Additional Information

War of the Immortals News