Savage Lands is a fantasy-sandbox-survival game set on a frigid island. Stranded naked and alone, you must gather resources and survive the elements, monsters, and other players.

Savage Lands is a sandbox survival game set in a fantasy universe. Explore an island pummeled by blizzards and inhabited by mythical creatures, while monitoring your vitals to survive through the night. Scavenge for resources—chopping down trees and picking away at stones to reap wood and ore. Transform gathered materials into new equipment and items. Craft weapons to hunt down deer, using every part of its body, harnessing meat and leather. Arm yourself and tackle lumbering Forest Giants and Kur Dragons. Protect yourself from the harsh elements by crafting durable armor and withstand the might of strange creatures. When the sun sets temperatures drop and you’ll have to be sure to seek shelter and huddle around the warmth of a flame to see the sun rise again. Play alone or with friends, but be wary of hostile players only interested in slaughtering other humans.

The Savage Lands is a frigid island where gloops of snow relentlessly pelt the ground. I turned around and gazed at my wrecked row boat. I was stuck. Enduring the cold, I pushed my naked—beautifully bald—body up the coast, collecting flint, stones, and seashells by the seashore. Finding nothing, and watching my health meters deplete I approached the nearest tree, assaulting it with focused martial arts punches, determined to convince the pine to become logs like its Tree of Life. But my fists did not reward me with logs, twigs, or sticks. I had a lot to learn about surviving in Savage Lands. My expectations stunned I returned to face the ominous coast. You cannot punch away at resources to gather valuable commodities. Instead, you must scavenge for tools that other unfortunate naked men have left behind. A hatchet is needed to chip away at trees, while only a hammer can be used to break apart stones. Desperate to knock over pines I headed down the shoreline in search of basic tools—big mistake. Lean-tos decorate the frozen shoreline, typically with resources scattered about them, but of the four I encountered none had anything useful beyond stones. And after passing the last hut, I was met with desolation. A giant statue of a dragon offshore signaled my demise.

On my next respawn I was lucky, finding a hatchet, stone hammer, some clothes, and cloth at my feet. Typically, upon spawning in the game all the necessary tools and resources are in a circular perimeter from your starting point. Each of the possible spawn points is on the same shoreline, and relatively close to one another. Pushing up and down the beach will reveal the resources for a successful start. Armed with a hatchet I was ready for my favorite part of any survival game, chopping trees. A few swings sends a pine tipping over, that must then be hit again to transform the fallen trunk into wooden logs. It’s a smooth enough process even considering some clunky controls. Controlling your character is no different than any other FPS, but some features feel lackluster or are lacking altogether. By pressing Shift you can sprint, but the increased movement speed seems more like a light jog than a heart-pumping locomotion. It took me a moment to register that I was moving faster, only realizing my hustle when I noticed my stamina quickly decreased. Also, and somewhat surprising, is the missing ability to crouch. It’s a useful motion in a survival setting, helping players sneak up on a deer to attack, or at least avoid aggressive players by hiding in a bush. Its lacking leads me to believe it may never be added. At least jumping is in the game, but it feels rather useless—beyond appeasing player’s expectation that spacebar equals jump. Without an adequate movement schema, it's easy to freeze to death in Savage Lands. What would a survival game be without status meters to monitor? In Savage Lands there are three: Body temperature (blue), Health (red), and Stamina (yellow). You will rapidly lose body heat in the snowy climate, as frozen water douses your naked flesh. In almost every early playthrough it was the blue bar that reintroduced me to the dead screen. Because once Body temperature is depleted your health immediately begins to drop. You’ll want to make a fire as soon as possible to stay warm.

Beyond meters there are four terminal effects to watch out for, typically received through combat: Bleeding, Poisoned, Diseased, and Starving. With the exception of Starving I managed to succumb to bleeding and diseased simultaneously after a ludicrous fight with a plague wolf. Considering I had finally gathered the resources to make Wolfsbane I was sorely disappointed. Bleeding can be cured by using a bandage, if you have the materials to make one, while diseased takes time to dissipate. And frost berries can be gathered to cure poison. Keeping a keen eye on your health can distract from the game’s lush environment. 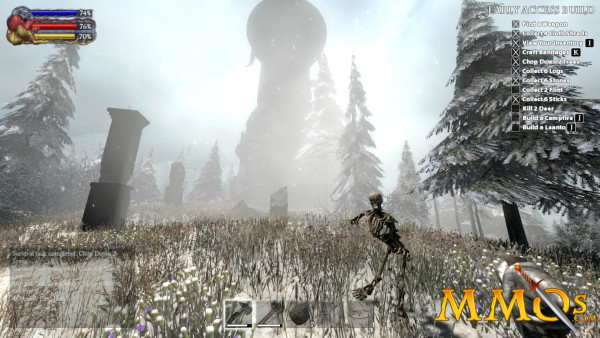 Savage Lands runs on Unity and manages to look decent on a first impression, though not groundbreaking. The featured screenshots in the Steam Store were taken by someone who understands photography, selling the game quite well. In actuality, even on the highest settings, Savage Lands gives a pleasant appearance but it cannot contend with Rust or Ark: Survival Evolved. The world is veiled in a grey overcast, that seems fittingly depressing considering you're stranded on an arctic island. It’s a bit distasteful at first glance, but quickly grew on me.

The forests are thick with vegetation, often obscuring resources and deer. More than once I lost a deer in the brush, a fitting consequence of survival. The ocean’s wash lulls you into a false sense of security when you first spawn. And the game shows off its engine when night approaches.

When the sun is setting beautiful crimson hues light up the landscape. It’s an awesome sight. And as wolves howl in the distance, and I huddled around a fire the fantastical nature of the game solidified. But a static sky gives off the appearance of a painting rather than a living world. I imagine future updates will rectify the issue, even though I must admit the starry blanket is gorgeous. Still, I was eager for dawn so I could continue crafting. Crafting is quite extensive, and easy. Starting off with a stone hatchet and stone hammer you can knock down trees and collect stones, flint, and ore by attacking them with all your might. Pressing K shows off available recipes, and there are more than a few. Craftable items are divided into 5 categories: weapons, armor, miscellaneous, food, and tools. You’ll have to hunt deer and kill wolves to collect resources like pelts and sinew to craft items. And a forge is necessary to unlock everything. With the number of items needed to craft it’s clear that you don’t have enough inventory space to hold all of your resources. I ended up focusing on expanding my bag space before making better weapons. But then I was attacked by a wolf and died, wallowing in my regret to not make a sword as soon as possible. Combat needs work. As of now, you only left-swing to attack. With no block function each fight boils down to your equipment, your health, and whether you can swing more than the enemy can attack. There’s no tactical element, and in a game primarily focused on first-person combat it needs something more to make it engaging. If not blocking, maybe spells? Savage Lands' combat needs more depth to make it viable as a PvP mechanic. As of now it's like Rust never evolved past naked men hitting each other with rocks. 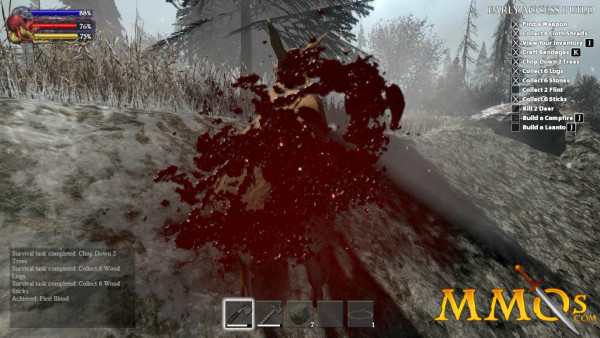 Savage Lands has a ways to go before it’s a finished product, but it is great fun. It’s price tag may not warrant a purchase just yet unless you’re committed to supporting the developers. Extensive crafting, a fantastical environment, and an emphasis on exploration make for an experience more in line with The Forest than other multiplayer survival games. Its niche as a fantasy survivor will have to be expanded upon before it can stand out among the endless catalog of survival games. The active development team and community feedback gives me hope for a refined product that will hold its own. If you’re a fan of the survival genre I highly recommend considering Savage Lands.

Savage Lands is developed by Washington based video game and interactive software company Signal Studios. The company was founded in 2008 by industry veterans. They released their first game in 2010, titled Toy Soldiers, for Xbox 360 and PC. In 2013 the studio released the free-to-play game Ascend: Hand of Kul for both Xbox 360 and Windows. Signal Studios announced Savage Lands on January 13, 2015 with a reveal trailer, and Alpha codes were sent out on February 06, 2015. The game was made available through Steam’s Early Access program on March 05, 2015.